Interview: Recollections of Nuremberg during WW2

Kurt Geuder interviewed by Blake Johnson, Calgary, March 2018
1. How old were you when the Second World War started, and where were you living in Nuremberg at the time?

I was close to eight years old I lived in the southern portion of Nuremberg. My parents owned a grocery store, milk store (which was separate from groceries), and a deli downtown which was run by my aunt. This is a picture of the store which my parents owned in Downtown Nuremberg”

History of the Calgary and District Beekeepers Association


Despite the best intentions, not all beekeepers keep detailed records of their colonies so it can hardly be expected that they would think to archive their association records. A recent investigation into the history of the Calgary and District Beekeepers Association suggests that the bee club is much older than originally thought. 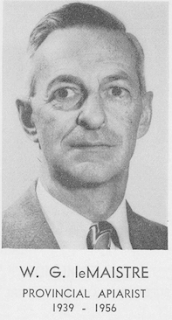 William Godfrey LeMaistre was  Alberta's second provincial apiarist. Born in England, his beekeeping education was obtained  at the Ontario Agricultural College. His predecessor as provincial apiarist, Mr. Hillerud, had also spent time learning bees in Central Canada. After LeMaistre's graduation in 1926, he farmed in Saskatchewan before returning to work for the College. He obtained the nickname "Tarz" during his college days, as he excelled at wrestling among other sports. The reference is presumably to his Tarzan-like moves on the mats? 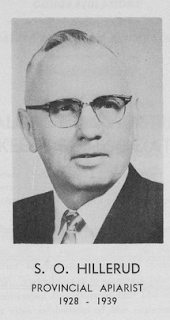 Sylvan Oswald Hillerud, the first Provincial Apiarist of Alberta, was a knowledgeable civil servant who learned of bees in Ontario and the United States, and continued his field education in the West. Alberta's chief bee guy from 1928, his life with bees took an abrupt end, but he was remembered with affection by beekeepers long after his retirement in 1939.

Born in Millsboro, North Dakota, to Norwegian Methodist parents on 19 December 1897, his family immigrated to Canada in 1904. In 1918, he listed Claresholm, Alberta, as home when he enlisted for the war. Arriving in England in July, he then served in France as a sapper with the 3 Canadian Engineers Reserve Battalion. Sadly, his service files have few details on his deployment.  In 1919, he worked for the Khaki College, a soldier-run school where he temporarily gained the rank of sergeant. The acting rank suggests he may have done some agricultural teaching there for demobilizing soldiers. He took the War Service Gratuity in 1919, and possibly used it to pay for schooling back in Canada's Prairie West.

After his graduation with a B.S.A. from the University of Alberta in 1920 [or 1921], he studied and mentored under prominent Ontario beekeepers J.L. Byers, F.W. Krouse, and G.L. Jarvis. In the interwar years, he also worked with bees in Montana and California. It was in 1928 that he was made the first provincial apiarist in Alberta. For a couple years he served as provincial inspector in the province and unfortunately as a part of his duties had to burn some diseased hives from time to time. In 1932, he continued his education, traveling to Cornell University to study.

Unfortunately, Hillerud's career in bees was cut short. In 1939, as another world war loomed, he developed an allergy which was said to have been aggravated by his previous gas poisoning during the First World War. He was succeeded as provincial apiarist by W.G. leMaistre. In 1958, Hillerud's memory helped to fill a historical tribute to beekeeping history in Alberta.


Sylvan Hillerud passed away in 1979, predeceased by his wife Isabel Janet Hillerud the year before.   Years after his time as the first chief bee man in Alberta, he was remembered with fondness by beekeepers of the province.

Father Albert Lacombe looms large in the early history of Western Canada. Born in St. Sulpiche, Lower Canada, he left for the West in 1850, when he took a posting in Pembina, joining the Metis on the buffalo hunt the following year.  In 1853, Lacombe was sent further into Rupert's Land, to assume a position at Lac St. Anne, and several years later he set up an mission at St. Albert for indigenous people in the Fort Edmonton area. While the evangelical efforts of religious orders have received their fair share of condemnation for their role in the colonial project of nation building, there are also a few connections between Lacombe and the actual construction of the iron road.

Lacombe's direct involvement with the railway may have begun in 1880, as the transcontinental line was just beginning to be extended across the prairies.  As Raymond Huel notes in the Dictionary of Canadian Biography, "he assumed responsibility for ministering to railway workers along a section of the transcontinental line being built east of Winnipeg, and in the camps he found that blasphemy, drunkenness, and immorality were rife. 'My God, send me back to my old Indian mission,' he wrote in his diary."

Lacombe's role as "railway worker" continued into 1883.  As surveyors plotted the location of the line near Blackfoot Crossing, Lacombe negotiated with the Niitsitapi (Blackfoot) chiefs, giving them gifts of sugar, tobacco, tea, and flour, relaying that Lt. Gov. Edward Dewdney would hear their protests personally.


Pierre Berton's popular history The Last Spike recalls that the directors of the CPR were so pleased with Lacombe's ability to clear the grade of indigenous resistance that they made the priest president of the CPR for an hour.  Lacombe decided to immediately grant himself two lifetime passes on the railroad, and free transport of goods for Oblate missions.  Not stopping there, he also guaranteed himself free use of the telegraph for life.  The directors were reportedly more than happy to afford him the privileges.

Lacombe was said to loan his passes out rather frequently, and one humorous incident, recorded by Berton, is worth repeating:

"On one occasion the two passes, which became familiar along the line, were presented by two nuns, newly arrived in the west.  'May I ask,' the conductor politely inquired, 'which one of you is Father Lacombe?' He let the blushing sisters go on their way."